A mother and her five-year-old son were in a car accident in 2018 and both suffered extensive injuries.

The mother sustained multiple broken bones, including several ribs. The child was in critical condition with injuries that required him to be placed into a medically-induced coma. Ultimately the five-year-old needed multiple surgeries to correct the damage he suffered in the accident. While both are now in recovery from the accident, neither will ever be the same.

The family was self-employed and with the mother not able to work for several months and hospital bills stacking up, the financial stresses added to the nightmare they were living. Interactions between the opposing parties was tense throughout the negotiation process, but after a number of months of engaging their structured settlement consultant they were able to come to an agreement and settle the case.

A market survey was completed by the settlement consultant, with five life insurance companies providing quotes for the five-year-old’s settlement and two declining to provide a quote. Out of the five options,  Independent Life’s offering was more than 10% better than the closest competitor with a 20-30% gap between its offering and the remainder of the quotes. 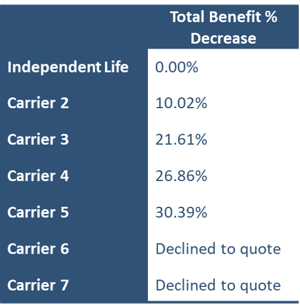 Independent Life’s liabilities are void of high-interest rate liabilities from the 1980’s, 90’s, and early 2000’s.  This allows the company to be competitively priced in most quoting formats. This fact increases the value proposition to not just the injured party, but to all the parties involved in the resolution of the claim.

Any of our distribution partners can use our quoting software, IQS, to quote your next case, or send an email to quotes@independent.life for assistance.